Working Together for Business Growth and Retention in Orange City

Ground breaking for the skate park was in March 2019. For more information about hours of operation please contact Orange City Parks & Recreation department at 386-775-5454.

Initial construction began on the new Care Facility in 2017. FHCP members will be able to schedule doctors visits, refill prescriptions and have lab work done at the facility. For more information about hours of operation and services provided please call 386-774-5961.

"This is a big day for Florida Hospital Fish Memorial, but it is an even bigger day for our community here in West Volusia. What we launched today has been in the planning stages for a couple of years," Rob Deininger, Florida Hospital CEO, said during the event. "West Volusia has seen rapid growth and we are committed to delivering the most advanced and efficient care possible in our communities. We are blessed to have the opportunity to begin this expansion project and build on our historic commitment for the future." 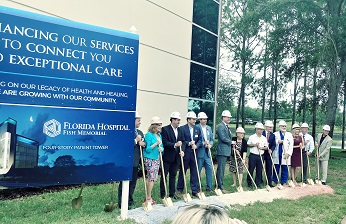 The new four-story patient tower will include a new 15-bed labor and delivery unity and a new intensive care unit, increasing bed capacity from 21 to 26 beds and a new medical surgical unit. The construction project will also fully privatize all patient rooms at Florida Fish Memorial Hospital, while increasing the number of licensed beds from 175 to 225. The expansion will also significantly increase the size of Florida Hospital Fish Memorial's emergency department, while adding pediatric emergency care.

Construction is expected to be completed in 2020.

Initial enhancements at Mill Lake Park were completed in early 2015, and included picnic pavilions, park benches, restrooms, a splash pad for kids of all ages, lighting and an entry feature with beautiful landscaping. The park's amenities now include Mill Lake, which has been cleaned out, deepened and reshaped to improve water quality and abate flooding risks. A 0.8 mile long multi-use trail surrounds the perimeter of the lake, with educational displays along the path, picnic pavilions, park benches and a lakeshore overlook. Coupled with adjacent playgrounds at Veterans Memorial Park and Coleman Park, these features make Mill Lake Park a great place for individuals and families to spend an hour or two a day.

City staff worked diligently to obtain several grants to develop the park and clean up and reshape the lake. Funds obtained from the Legislator's Appropriations Act and the St. Johns River Water Management District addressed water quality improvements (nutrient reduction) needed to protect the Blue Spring as well as addressing the Spring Minimum Flow and Levels by increasing stormwater storage area within a high aquifer recarge area. The park amenities funded by Voluisa County's ECHO Program added to the State and City's goal to build a strong community. 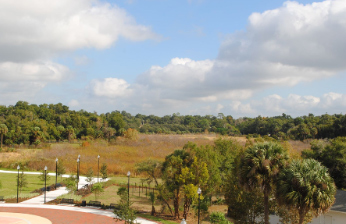 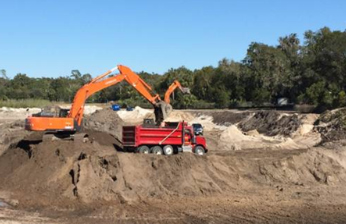 Mill Lake has a rich history. Its location on the south side of the Orange City Historic District provides a cultural touchstone to the community. The 20-acre project site was one of Volusia County's first lumber mills where wood was produced then taken by rail to the St. Johns River where it was distributed to the rest of the world. For years it had been a dream of Orange City to develop Mill Lake and the surrounding property into an amazing park for the community; however the City only owned 3 acres of the 20-acre site, making the vision of developing Mill Lake Park seemingly unattainable. City officials did not give up, and in 2014 negotiated with the Florida Department of Transportation (FDOT) to acquire the remaining 17 acres of land, allowing the City to plan a bright future for Mill Lake.

"Collaboration was key in making Mill Lake a reality," Mayor Gary Blair says. "This park had been a dream for a long time, and now it is finally here for our community to enjoy."